SPIC MACAY an initiative to support artists who make their living by practicing Indian classical and folk art forms.

SPIC MACAY an initiative to support artists who make their living by promoting and practising Indian classical and folk art forms.

A theatre play was presented by Naya Theatre, Bhopal in Manava Bharati India International School on 11th March 2022.The program started with lightning of lamp by the Director of theatre play Shri Ramchandra Singh,a member of the theatre team Ms Nandani,Principal of MBIIS Dr Geeta Shukla and Dr.Anantmani Trivedi followed by a sanskrit shloka by Avantika Bhandari of class IX B.After the lamp lightning an introductory speech was given by Ms Jasleen Kaur. 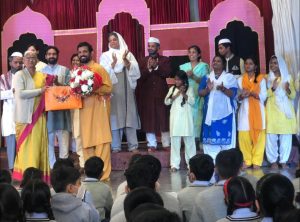 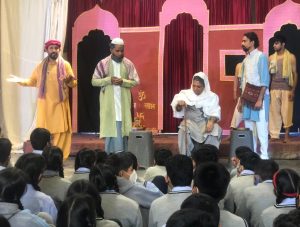 The famous play performed by the artist was “Jin Lahore Ni Vekhya ,Wo Jamiya Hi Nai” .The play was written in the 1980s.It is the story of a Muslim family who migrated from Lucknow to Lahore and is alloted a haveli vacated by a Hindu family because of the partition. The play started with a melodious song depicting the condition of India and Pakistan after the partition. The play showed different feelings of people in different circumstances. All the artists played their role well.They were so good at their performance that each and every moment touched the hearts of the viewers.The way they showed the affection of the Muslim family towards an old Hindu lady was really heart touching. 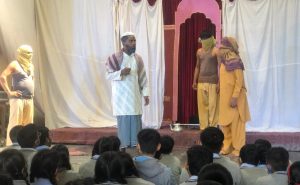 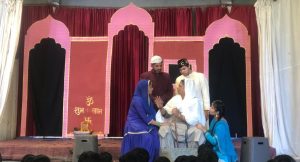 The play received a thunderous applause from the audience. Shri Ramchandra Singh ji ,the Director who also acted in the play appreciated our students on their knowledge of literature and was happy to see the children take interest in the play.At last Dr.Anantmani Trivedi gave the vote of thanks to the whole team .Everybody enjoyed the play .It was a great success.